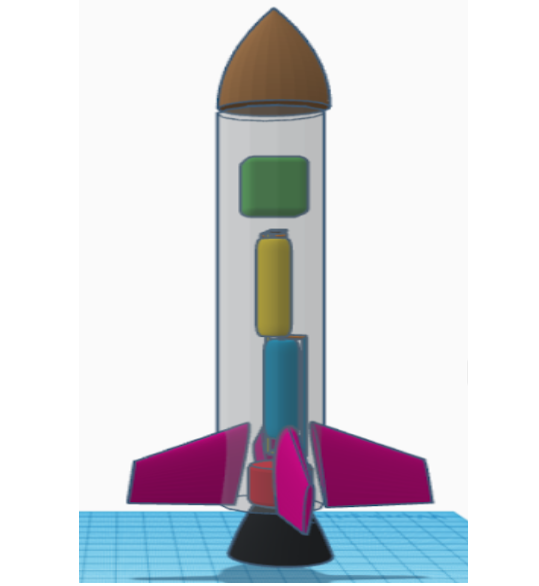 My 3D ROCKET’S NAME IS – MARTIAN FIREBOLT
IT IS A ROCKET WITH LIQUID FUEL AND LIQUID OXIDIZER.
The rocket's functioning is governed by Newton's laws of motion, Charles law and Boyle's Law.

Structural system-
1. Nose Cone- The nose cone is made of fibreglass. It is shaped in a particular way so as to reduce the aerodynamic drag caused by the Earth’s atmosphere. Payload like satellites, missiles, cargo etc. are placed inside the nose cone.
2. Frame- The outer covering of the rocket is known as a frame. My rocket’s frame is made up of light but strong material (High grade aluminium) in nature so that higher acceleration can be achieved. As according to Newton’s 2 nd law of motion, F=ma, means keeping force constant mass is inversely proportional to acceleration. So lesser the mass, greater the acceleration. The Frame usually employs long stringers which run from the top to the bottom which are connected towhich run around the circumference. The skin is then attached to the stringers and hoops to form the basic shape of the rocket. The “skin” may be coated with a thermal protection system to keep out the heat of air friction during flight and to keep in the cold temperatures needed for certain fuels and oxidizers.
3. Fins- The fins provide stability by maintaining the orientation and flight path of the rocket

Guidance system
The navigation system (like GPS or compass) on Earth helps us to easily move from one place to another. Similarly, a rocket also has a system which will maintain its path from the point of launch till it reaches the designated point or an orbit in space. This system is called a guidance system. This also maintains stability and controls the rocket in its path.

The guidance system of my rocket has the following parts:
i. Sensor - This is just like the human sense organs. It senses if the rocket moves away from its intended path and sends the signal to the computer.
ii. Computer -This evaluates the information sent from the sensor and decided the course of action just like the human brain.
iii. Radar -This is used to track the position of the rocket.
iv. Communication equipment - These are used to send commands to the rocket from the ground station in case of path change.

The Propulsion System
1. Fuel- is a substance that burns when combined with oxygen producing gas for propulsion. It can be either in solid, liquid or gaseous form. The fuel used in my rocket is liquid hydrogen. It is stored in liquid rather than gaseous as liquid form occupies less space. So more fuel can be stored in lesser areas.
2. Oxidizer- is a substance that releases oxygen in combination with the fuel. Oxidizer used in my rocket is liquid oxygen as it goes well with liquid hydrogen as a fuel. It is stored in liquid form for the same reason as hydrogen which is mentioned above.
3. Ignitor- is a device that initiates the combustion process.When fuel reacts with the oxidizer or the oxidizing agent, which in my rocket happens with the help of an ignitor, a large amount of heat is released.
4. Combustion chamber- is a closed vessel where combustion of fuel takes place. Temperature inside is approximately 2500 to 4000 degree Celsius and the pressure is 60 bar. This is because gases inside the combustion chamber become so hot that they expand rapidly and exert pressure on the inner walls of the combustion chamber.
5. Nozzle- is convergent in beginning and has a diverging portion. The gases coming from The combustion chambers are at a very high temperature and want to expand. The function of The nozzle is to expand and accelerate the hot gases coming from the combustion chamber. As gases rush out of the nozzle at very high speeds, they exert an upward force on the rocket which we call thrust and this thrust causes the propulsion of the rocket. This is because according to Newton’s third law of Motion, to every action there is an equal and opposite reaction.Now if the rocket achieves the escape velocity and escapes earth’s gravity.