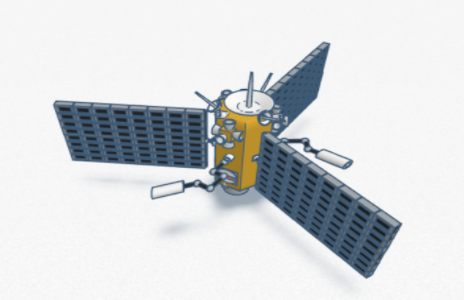 Overview
About my project: This is a large satellite useful for deep space explorations, including mars. The satellite has a large capacity to hold numerous instruments for space research. The satellite can fold it's solar panels and fit in most rockets. This satellite is different from other satellites as its body is polygon shaped rather than the normal cuboid shaped bodies of different satellites.

Propulsion system
The engine is powered by both cold gas and electric types for long lasting fuel supply. The thrusters are 3 sets of 6 mini engines connected with the cold gas tanks to help the rocket steer. Overall, the engine has a very high specific impulse and can do a lot of maneuver corrections and orbital changes without the threat of losing fuel quickly.

The satellite has 6 solar panels connected to 2 large batteries which can independently power up the whole satellite. The satellite also has an emergency battery if there is a damage or malfunction on the main 2 batteries.

Scientific Instruments
The satellite has 9 stationary cameras, 2 movable cameras and 2 scanners. There are 3 cameras on the bottom, 3 on the top and 3 on the sides. The bottom cameras are useful to show if the staging was done correctly during the launch period and to check if the engine is damaged in the later parts of the mission. The top cameras guide the satellite and make sure the orbit is clear of hazards. The side cameras are useful for experiment purposes and mostly scientists will be using these cameras. There are also 2 moveable cameras which can move 360 degrees.They are specially made to find science data. Once the camera has found something, the satellite will orient towards that direction for one of the two scanners to research and give the findings to the ground station.

Additional features:
1. If you look closely at the connection between the solar panels and satellite, there are 2 rotatable balls present over there. This gimballing movement helps the satellite orient towards the sunlight and help the satellite to turn to any direction.
2. There is a hatch door which helps an astronaut to gain the inner parts of the satellite to change the setting of the satellite depending on the situation.
3. Even though each camera has a purpose, all the cameras have a common thing to find: outer space science data.
4. Most of the instruments are coated with gold or white paint to avoid damages from solar radiation from the sun.
5. There are extra cameras behind the rotatable camera to check if any damage is there on the moveable cameras.
6. The satellite has 40 data chips in which each can hold up to a whopping 50 TB or 50,000 GB making the satellite store data up to 2,000 TB or 2,000,000 GB.