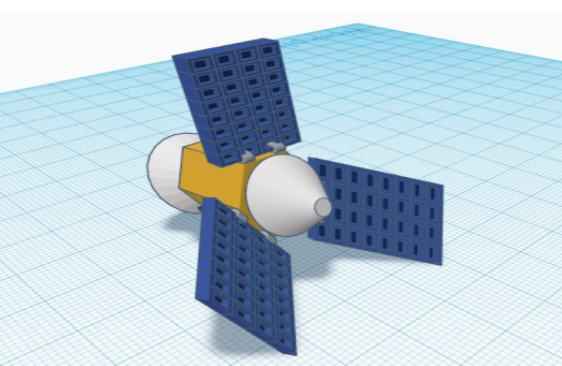 Hotter areas will be represented in dark red and colder areas in light blue. To send images and signals back to Earth there is a small antenna present on the satellite.

There is a white cone-shaped structure made of 2 inches of carbon fibre. It protects it from the heat of the sun or supposedly sometimes “solar storms”. This

(Solar storms) is very rare but if they can be protected a bit. The body structure is made of Aerospace Grade Metal (Or also known as Aviation Grade Metal). Then there is a layer of wolverine fabric on it. The wolverine fabric is proven to be a self-healing fabric.

So, if there is a “solar storm” or something else that could damage the satellite, it will be protected by the wolverine fabric and it will heal the fabric by itself. The solar panels are present to convert the sun’s radiation to solar energy. The batteries that store the solar energy will be present inside. 4 black nozzles are present on each side in order to prevent altitude or route loss. And if someone thinks about how it is getting propelled, there is a small hydrogen and fuel tank present in the satellite to propel it. In case there is a route loss there is a built- in guidance system that will lead it back to its path.