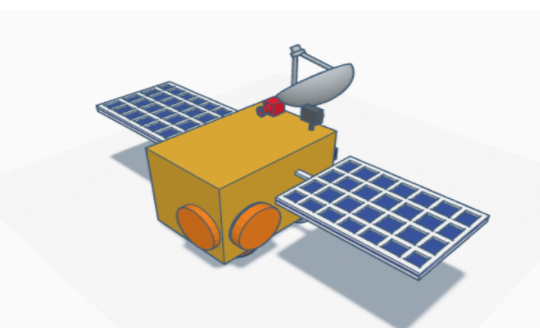 The amount of methane in the atmosphere.The day to day atmosphere temperature through the methane sensor.While colonization the high resolution camera gives us the detailed picture and recording of the progress on mars, also send the information to the ground station about the materials and data.After colonization The satellite while send us a picture about the colonization and settlements. Then it will send the daily weather report to the ground station on mars and earth. Parts and functions of MCSS.


Launch to deployment
The rocket for this mission will have five serial stages and six parallel boosters. The serial stages will have liquid engines and the three boosters will have solid and other three have hybrid. The boosters will start burning. After it reaches halfway the boosters will detach and step by step the rocket's serial stages will separate, then the capsule will reach near mars, MCSS pops out and adjusts the altitude by the reaction wheels. Work procedure before colonizing MCSS. Work procedure of MCSS before colonizing. The MCSS starts searching for a location. Its camera may take picture of the good location and send it to the ground station on the earth. Then the moisture analyzer and the methane sensor research the atmosphere of each location. The infrared camera takes the information about the daily temperature.


Work procedure while colonizing MCSS
It gives the information from the rover. Also checks the temperature and atmosphere, gives the details to the astronauts working on mars, surveys the work and sends it to the earth.

Rocket part
This is a five tandem staged and six parallel staged rocket. We have this satellite inside a capsule. The fifth tandem stage is the main and it has strong nuclear boosters. It also has a facility of deploying the satellite very safely after reaching the orbit, the capsule pops out and another capsule with a cold gas thruster which would adjust the direction and opens to deploy the satellite.