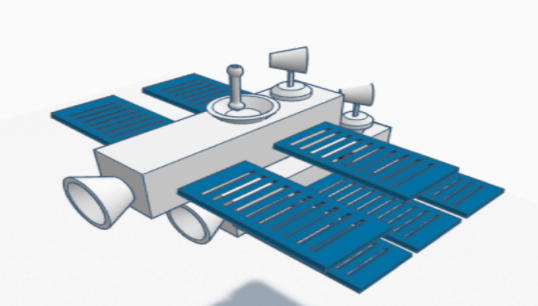 They will be assembled gradually in space like the International Space Station (I.S.S). First M.R.S spacecraft will also carry a rover along with it to send it to Mars. At the last, the robots will be sent in special robotic sensor steering space capsules to board the M.R.S. Once all is verified and corrected, the M.R.S will use it’s thruster(s) and thrust itself on its way to Mars. It is meant to study Mars and communicate with active rovers and satellites to find out what they discovered. The M.R.S’s crew will be robots, and the M.R.S CONTROL TEAM back on Earth will guide the robots and M.R.S. It has six solar panels on the first deck, and four solar panels on the second deck to harvest energy from the sun and use it for the M.R. S’s needs, and to recharge the robots.

There is an exit hole to go into space with a chain attached to the robot so that it won’t get lost in space and can go out and come back in as per the instructions and decisions. The exit hole can also be opened and closed. It also has two telescopes, one on the first deck, and second on the second deck to zoom into objects to have a more specific view and examine craters.

It also has a live witnessing view hole to examine objects from a camera. The robots will be fitted with necessary components, and the M.R.S will also have a robot charger. The robot charger will take the energy from the sun and use it to charge the robots. M.R.S also has onboard computers for communication and other needs. It also has R.C.S for attitude steering and yawing. It will help humanity colonize Mars. It’s mission is simple but also complex.

It means to find out more about Mars, along with the special Rover, M.S.M.R (Mars Special Mission Rover) for landing on the surface of the Red Planet. It is very amazing to know that the M.R.S may also sustain life. It has the storage compartments, and if needed, more decks can be added in future missions. An interview with M.R.S space satellite:Hello everyone! I am M.R.S and will be sent to Mars in a future mega-mission and carry fellow-robots with me! I shall be a home for most robots and might even be a house for humans! I may be too big to go into space, but I will be assembled in space. After a few years, I will thrust myself, and reach Mars! An interview with the crew-robots, We are the Crew-Robots! We are the astronauts of the M.R.S, ourhouse.

We can work for nearly a month or so without the robot charger in the M.R.S! We robots are going to be utilized for exploring space, and a most possibly habitable planet, Mars . Sofar, all we know is there are traces of water on Mars, and there actually is water in frozen form on Mars! But the Oxygen level on Mars is very low. High Carbon Dioxide amounts are in the air. Forget breathing without special equipment on Mars! You will be needing special equipment, oxygen tanks, water, food and much more! People still don’t know, and we too, don’t know how the oxygen level came on Mars, as we know trees are the main producer of oxygen, and there are no trees on Mars! Carbon dioxide might’ve come from asteroids that crashed on Mars, and so probably Oxygen! We will be transported to M.A.R.S from Earth in robotic space capsules, or some in capsules driven by humans! Don’t worry, we won’t be caught in a dust storm until we land on the surface of Mars! Click on the arrows below to see more about Mars!

Satellites exploring Mars
There are many satellites exploring Mars, some have broken down, while some are still active. The rovers on Mars are Perseverance, Curiosity, Opportunity, Spirit and Sojourner. Future Mars Rover missions include Exomars or Rosalind Franklin. Out of the current Mars Exploration Rovers, only two;Curiosity and Perseverance are active. Mars is the fourth planet from the sun, and a family of the rocky planets. It has a very thin atmosphere and is exposed to radiation and ultraviolet radiation. The gravity of Mars is lower than that of Earth! It is very rocky and a mysterious planet. It may have supported life in the past, or presently!