About Me: Hello, I am vivaan patni in 8th grade from Maharaja Sawai Man Singh Vidyalaya, JAIPUR.

Rovers on the moon and other kinds of exploration vehicles, have helped us learn about places that are hard for humans to reach on their own. Each rover has a mission and they need a few key things to work.

First, a rover vehicle needs a power source. Some rovers are battery-powered. Other rovers use solar panels to harness energy from the Sun. These solar panels are usually on top of the rover. The electricity they produce powers the wheels and the sensors the rover uses. My rover also work on solar energy. The body of the rover is built of solar panels.

Scientists and engineers ask questions about what job they want a rover to do, and the environment where the rover will be working. The moon has no air. The tires we Earthlings have on our bikes and cars wouldn’t work on the moon. In fact, these kinds of tires would explode there. Instead of an inflated tire surrounding a rigid wheel, an integrated lunar wheel with rings of flexible material extending from a hub of metal spokes has been designed.

This rover is built with simple and easy-to-understand technical methods. It has been loaded with features that are the main requirements of the tourists such as live video of the lunar area, temperature, and humidity of that particular surrounding.

Special features of the rover are: Wireless controlling over the network. Live temperature and humidity. Live video streaming. Can take samples from the surrounding. Have the ability of feature expandability. Lightweight and small. Cost-effective and easy to maintain. Automatic battery charging through the use of solar charging.

Lunar Rover Camera Movement: The camera of the lunar rover can capture the live video and stream it to its server in real- time. The user can move the camera up to 180degree left and right as well as up and down. All these functions are controlled over a simple setup on the same server with different sections. The programming for the live streaming is done using the Java language.

The Lunar rover sends the live feedback of the temperature and humidity in which area it is operating. So the user can be assured whether to move in that area physically right choice or not and can determine many more assumptions. This live feedback of the temperature and the humidity is also wirelessly transmitted over the secured network and can be accessed only by the user that is on the same network.

The lunar rover has the ability to self-recharging its battery by using solar power. A solar panel is attached to the rover so it can use it to recharge itself and doesn’t need the intervention of humans. By this, the rover can operate for more hours than the initial timing.

METHODS TO ENSURE SAFETY OF PASSENGERS

My rover is Made out of Aluminium which is a Strong and Lite alloy as a result of which my rover will be indestructible, The seats Have Cushioning , seatbelts ,shock absorbers which will comfort the passengers at the time of landing of the rover. It also has Special Shielding that helps to protect Astronauts/Passengers from harmful cosmic & other Harmful radiations. Have put sensors inside the rover to monitor the radiation levels .

We have giant Focus lights which will help in clear distant vision. 180 Degree Cameras Solar Panels to power the Lunar Rover Batteries to control the Pressure, temperature etc. Gravity Control Mechanism Inside Rover Constant Oxygen Supply within the Rover for the comfort of the Passengers and Backup Cylinders have also been provided Devices have been provided to Maintain Suitable Temperature within the Rover

Working on the entire project was a lot of Fun, while doing it I got to work on a New Platform called TINKERCAD which was an Amazing experience. Also got to learn and know a lot about the Lunar Rovers , past expeditions to Moon, developments over the years for space exploration. 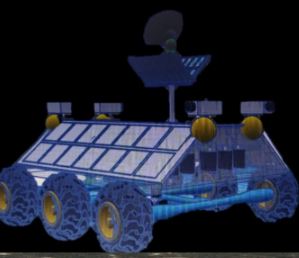 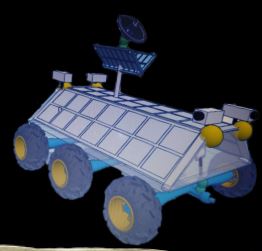