About Team: I am Ridhima Kumar
I am Nimisha Tripathi


About project: This is Team Territory lunar base. Our team’s name is Team TERRITORY. We humans, plan on discovering more about the universe and travel to different solar systems. But, how can we do this all without being able to settle on the moon, our closest neighbour in space! So, we have come up with a self-sustaining, futuristic plan for settlements on the moon. We plan on sending 4 very experienced astronauts to the moon camp, for a term of 6 months for experiments and further research of the moon. The moon camp has 4 domes, each for different purposes - the control room, the oxygen and water plant, the lab, and the greenhouse.

Close to the Lunar Poles

South Pole crater is prominently visible from the Earth as it reflects light waves and is known as Tycho. This crater is estimated to be about 108 million years old. We have chosen this location due to the easy water availability and the abundance of sunlight in the spot. The highlands in the crater will help in providing better connection with Earth and thus, contribute to the ease of communication. Another good reason is that the harmful radiation from the Sun is by far lessened due to the shadow of the crater.
How do you plan to build your Mooncamp? Which materials will you use?

As we slowly begin to colonize different celestial bodies, we look at it from the futuristic point of view. Humans have barely been on the moon for a few hours and have literally trashed the area. At this rate, we will be living in trash on the moon. So we have a solution to that. The metal and plastic can be reused to build the camp. We plan on building the camp using the method of 3D printing. How do you plan to provide the astronauts with the follwoing things?

In the beginning, the water will be provided for about 1 or 2 weeks through transport from Earth. Later, the water will be provided through 2 methods. The main source of water for the astronauts would be the recycled water. The urine would be recycled to make the water that will be used for drinking and bathing purposes. We also have the multi-functional air vents that will be absorbing the humidity from the air and send the water to the oxygen and water plant to be processed and provide water. However, the water is also extracted from the moon’s surface.

At the very beginning, the astronauts will mainly rely on the packed food that will be transported from Earth. There is also a greenhouse that will help in providing the raw food that can be cooked and eaten. The Greenhouse is mainly automatic. Special rovers are dedicated for adding the minerals to the water for the plants.

The moon camp will be powered through a combination of solar power and batteries. We have about 30 solar panels. That may look like it’s a lot, but half of them (about 15) are for batteries while the other half is for the energy required to run the moon camp. This is because; we will need the batteries during the lunar night and eclipse. The rovers that we will rely on for water extraction, 3D printing, etc. will be powered using nuclear energy. They will continue the research even after the astronauts leave the camp.

We will mainly rely on the plants and algae for the oxygen to be provided on the moon. Here we have the air vents that will provide the air that is needed at the atmospheric pressure of 1bar. This will prevent the need for a big helmet around the head of the astronauts. In the worst case scenario, if the air vents are malfunctioning, we have the oxygen candle for the astronauts, but that is only for emergencies. There are several reasons we are not using the Electrolysis method. There is a limited amount of water on the moon.

As human lives are very important, our main focus for protection is the main room, where the astronauts will be living. The main room is a rectangular room protected by a dome of five layers – also known as the Whipple shield – for protection against micrometeorites. One of the layers is made up of water to prevent radiation hazards. As for the others, the domes are 3D printed and covered with the self-healing, highly stretchable cloth – the Wolverine cloth.

The time zone followed would be the IST. For the astronauts, a typical day on the moon would be like this:

Waking up and getting ready (brushing, bathing, etc.)
Meal (breakfast)
Health Check (in the lab)
Exploring the moon surface
Helping in the experiments
Meal (lunch)
Checking the plants (to see if they are ready to harvest)
Free time (entertainment)
Meal (dinner)
Sleep
The astronauts will also be advised to take snacks for every two hours, as they need to be very healthy. They are also required to sleep every day for at least 8-9 hours.
Our moon camp has a crucial defence and escape plan in case of a comet attack. Defence:
On top of the control room, we have the radar that will detect any meteorite or micrometeorite that is aimed towards the moon camp or a part of it.
Escape plan:
The astronauts will be informed immediately when there is going to be a comet crash on a part of the moon camp.
They are to evacuate the domes at the sound of the alarm, taking their space suits with them to be able to breathe outside the camp.
The rovers will carry the astronauts to a different place.
After the crash:
The buildings are to be rebuilt with the 3D printing rovers at a faster rate.
As for the greenhouse, the plants and meat would be supplied again from Earth. 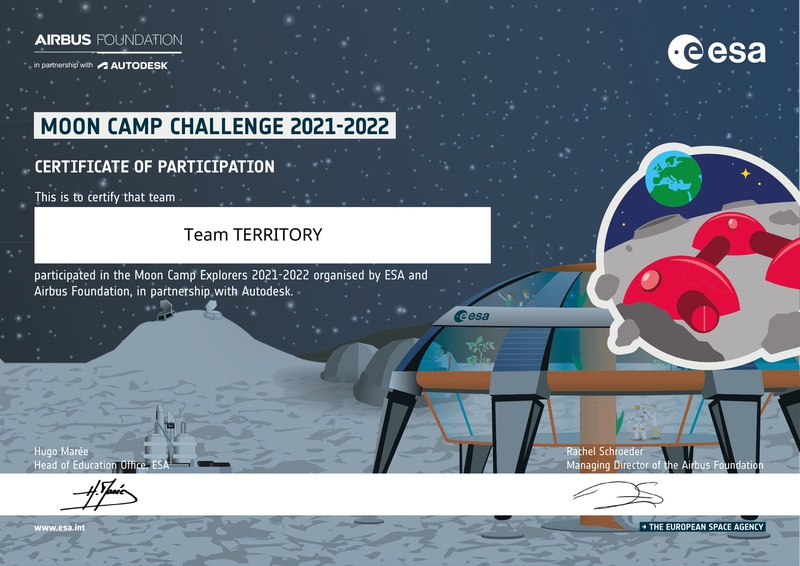 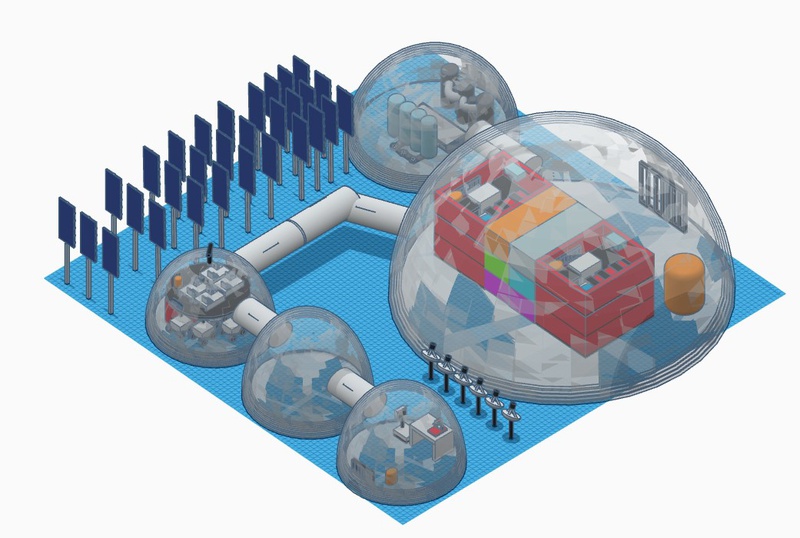 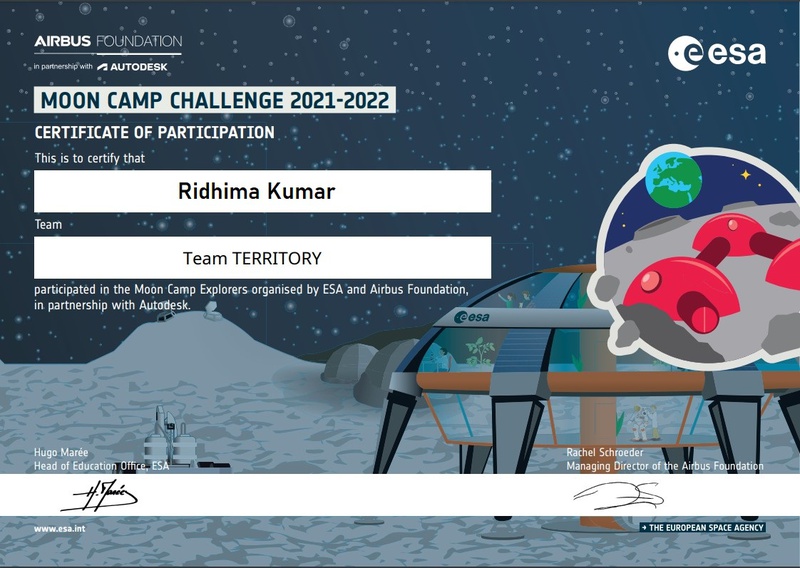 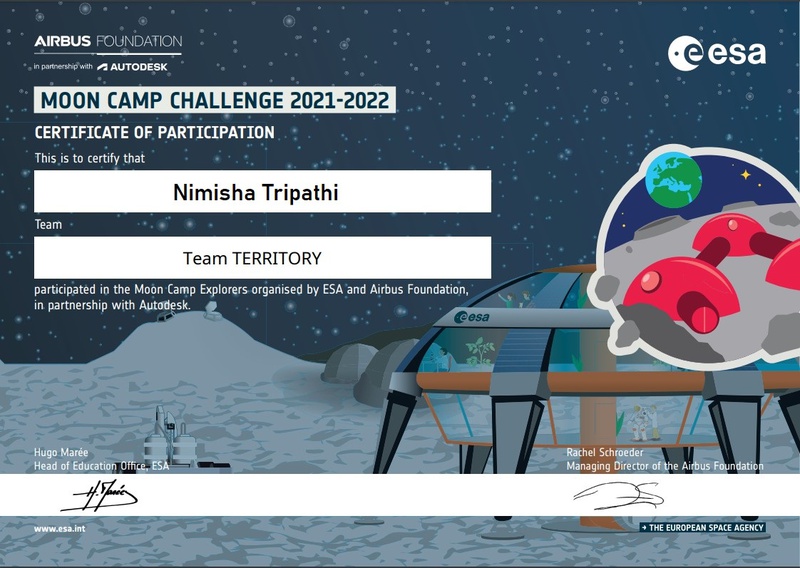