About Me: Hello, I am srihari shaiju studing in 9th grade.

The Hub is designed as the building for the astronauts to rest and sleep. It is also used for recreational activities and for communication with Earth base. Constant scans are taken by the astronauts to assess their body condition for health and research purposes. The Hatch allows the astronauts into a vacuum chamber then allowing into the Hub.

The Greenhouse is the room designed for production of fruits and vegetables from nurturing plants. Most of the oxygen released during photosynthesis by these plants are gathered into the oxygen silos for the usage of the astronauts. The main crops grown are sweet potatoes, spinach and carrots. The sweet potatoes have a heating container with a bulb uptop to represent the sun, on the other hand, spinach and carrots are kept in cool temperatures according to their respective requirements.

This is the room where the Ice Chunks mined are heated using solar radiation and the obtained water goes through a process of electrolysis to separate its oxygen constituent. This oxygen is then supplied to the silos.

The heating room uses the power of solar radiation to melt the ice chunks obtained. 20 small mirrors are kept is such an arrangement where the solar rays reflected are concentrated onto a focus point where the container holding the ice chunks are kept. The shutters are closed when keeping it in position. The ice within a very small amount of time melts giving us water. This water is then taken to the electrolysis room...

Electrolysis is the process where two metal rods are placed in the solvent of salts repectively which the person wants to seperate. Here, we want to seperate the oxygen from the water. We also recieve Hydrogen, which provides as a fuel for the rocket along with the oxygen as an oxidiser. The oxygen obtained is taken into the silos. Since oxygen obtained is relatively less, the process should be conducted at least upto 48 times a day, 2 times an hour.

The oxygen silos are the storage units for the oxygen obtained from the Greenhouse and the Electrolysis chamber. This oxygen is also supplied to the main Hub of the astronauts, where they can refil their tanks too.

The Chand Base is equipped with turrets that fire lasers at any meteors that may pose a threat to the base. It may be manually controlled by the Earth Base or Hub, or controlled by the AI that is installed in it. The atmosphere of the Moon is thin, hence the meteors won’t recieve any resistence on their way to collision. Therefore this measure is very important.

The solar panels are the main source of energy of the Chand Base. The solar energy is transferred to all the Base’s structures. This method renewable and sufficient.

The Ice Driller model- 231 is the vehicle used by the Chand Base to obtain the Ice Chunks from the Patches of Ice obtained at the Poles of the Moon. It has a heated driller that can open its corolla to suck in the broken off ice chunks. The ID-231 can be operated interchangibly by either Human control or the AI implemented in it. It has a storage capacity of ice enough for 200 KiloLitres of Water.

The Chand Base has an Antenna that is used for communication with Earth Base. It can be used directly from Hub and its direction can be changed based on where Earth is.

Why did I make the Base the way I made it?

The main mission of the Chand Base is to help research. It would enable us to know how to take precautions for future missions. The constant scans taken by the astronauts would help is understand the changes that occur to the human body on the Moon due to the constant exposure to space radiation and low gravity. It represents the future initiatives that are to be taken up by countries world wide. It would be easier for us to observe the vastness of space from the Moon as unlike Earth, it has no atmosphere to provide interference. We would be able to explore much more and even provide as a fuel refil spot for missions to Mars and back. In the model I have made, it provides for most of the necessary resources and requirements that are needed to achieve this. 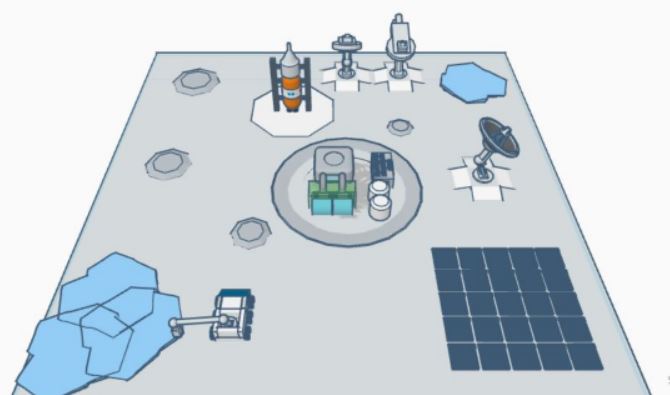