About Team: I am Rithik Satheesh
I am Haleef Jiyad
I am Jumana Khalid
I am Dhvanit
I am Vaibhav Sahu


About project:
We chose this name for our camp as Lunar means moon and X sounds nice. There can be around 10 astronauts accommodated at a time who will stay there for around 1-2 years. We will carry out experiments for better signals in telecommunication. In our camp, we have the following rooms- Water Distillation Plant, Greenhouse, Building + Garage Room, Oxygen Generating Unit (Regolith Method), Ground Station Contact Protocol Room, Landing Base and Launchpad. Inside our Main Base we have – Security Room, Bathroom, Gym, Entertainment Room, Robot Depot, Elevator and Bedrooms.
Our camp is unique because we have high-end security, renewable food and energy and Astronauts can survive in our camp for years. Some pipes connect each room thus avoiding the need for astronauts to wear space suits every time.
We have a Main Base which is the most protected part of our camp and has rooms such as the security, health and meeting rooms and much more. There will be two floors in the Main Base with the top one being the residential quarters. We have building rooms also to build robots and rovers with our materials taken from Earth.
There will be supply shuttles coming and going whenever needed in case our supply has depleted.

Close to the lunar equator

We chose the equator of the moon because we can get enough sunlight to power our camp and get better connectivity and signal with ground stations on Earth.
How do you plan to build your Mooncamp? Which materials will you use?


To build our camp we will use CNC machines and will make the materials from the lunar soil. Others like machinery which are used to build will be provided and brought from earth to the moon. Materials are extracted from lunar soil. Rooms in the base will be sent from the earth as we will be building a cover base over it and making it the main base. Others like nuclear plants materials will be brought from the earth through another satellite, same goes for the distillation centre and greenhouse which take a lot of time and materials

We will not be able to go on long expeditions for water because our moon camp will be set on the equator, and ice is only found in the southern pole of the moon. So, we are going to send moon rovers to collect ice and bring it back to the moon camp. We are going to purify. We will use a distillation method to purify. The water will be used for astronauts and greenhouse plants as well.

We will be using greenhouses for some crops but mostly it is going to be packaged and sent from Earth. We have one huge greenhouse to plant all types of possible edible crops that can be grown there on the moon. The astronauts will be checking it every day and it works automatically such as the watering process etc.
Some foods will be packaged in different ways. We will also be including these types of foods:
Rehydratable
Thermo stabilised
Irradiated
Fresh
Natural form
Intermediate moisture
Frozen
Refrigerated

We are going to use solar panels, batteries and nuclear plants for providing energy and power. The nuclear plant uses uranium as fuel. These are a type of power plant that uses the process of nuclear fission to generate electricity. They do this by using nuclear reactors in combination with the Rankine cycle, where the heat generated by the reactor converts water into steam, which spins a turbine and a generator thus producing electricity. It is located in the northern part of our moon camp. We have placed the solar panels there for more absorption of solar energy.

We are using the “Regolith method” for the extraction of oxygen. The process involves placing the powdered regolith in a mesh-lined basket with molten calcium chloride salt serving as an electrolyte, heating to 950°C. Passing a current through it causes the oxygen to be extracted from the regolith and migrate across the salt to be collected at an anode. We have airlocks because we do not want the air to escape out. N2 can be supplied from earth or dying plants and CO2 is going to be provided from some of our greenhouse plants.

We will be using lead, tungsten and concrete to make our camp because it will be protecting the camp from radiation. We will be having 3 layers against radiation. This will be helping the camp protect itself from flying space debris and harmful radiation in space. Space debris can come flying at high speeds and could damage the base badly so a backup layer of the same 3 layers is placed underground (will be pulled up automatically by sensors when it detects critical damage to the shields) in case the first one gets damaged.


The astronauts will follow GMT as it will be easier for astronauts and the Communicator as well.
The astronauts will wake up at 6 am GMT.
At 8 am, they start working in the telecommunication base and do experiments assigned by Ground Stations. They do experiments and have meetings to discuss the camp.
The camp has an emergency escape room that is connected to the main base. The astronauts can stay there for a maximum of 1 day. The room has two doors. The first door, to get into the room and then the second door, to go outside the camp.
1 astronaut will be in charge of the crew and the safety of the spacecraft, 2 astronauts are assigned to control robots and rovers which are sent to the moon. 2 are doctors, 4 astronauts will be building and repairing. 1 will be checking the camp and the surroundings to detect any unusual occurrences.
The astronauts have space suits and continuously venture outside the base and check for malfunctions and errors occurring in the base. They experiment in the lab with lunar soil and mine for materials. The hovering satellite collects thermal scan data and sends it to the main base on the moon which is later transmitted to the ground station on the earth. 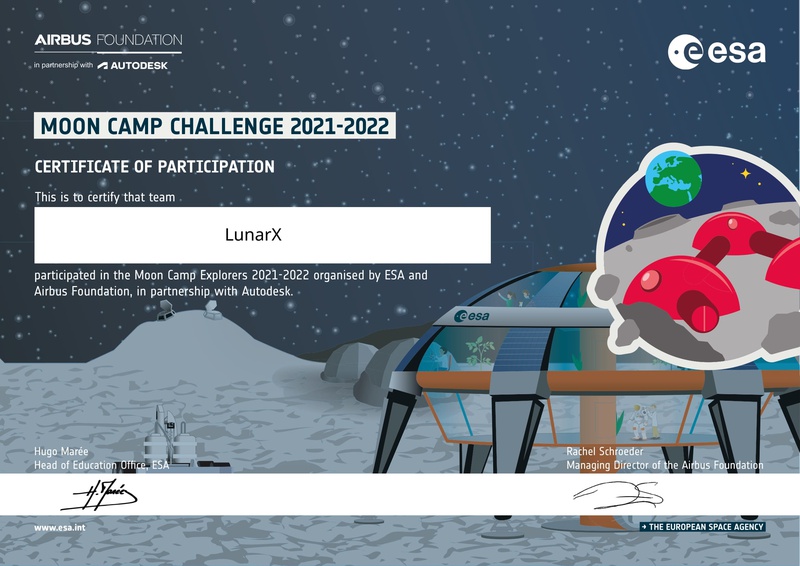 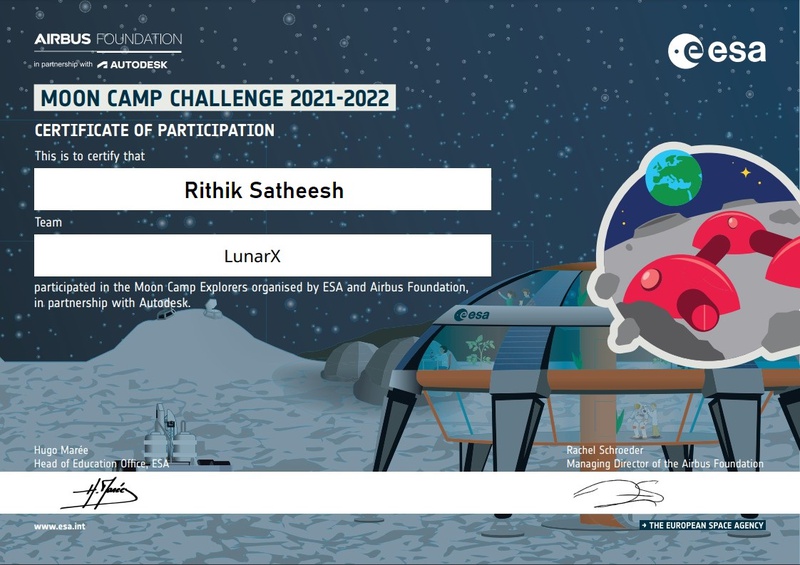 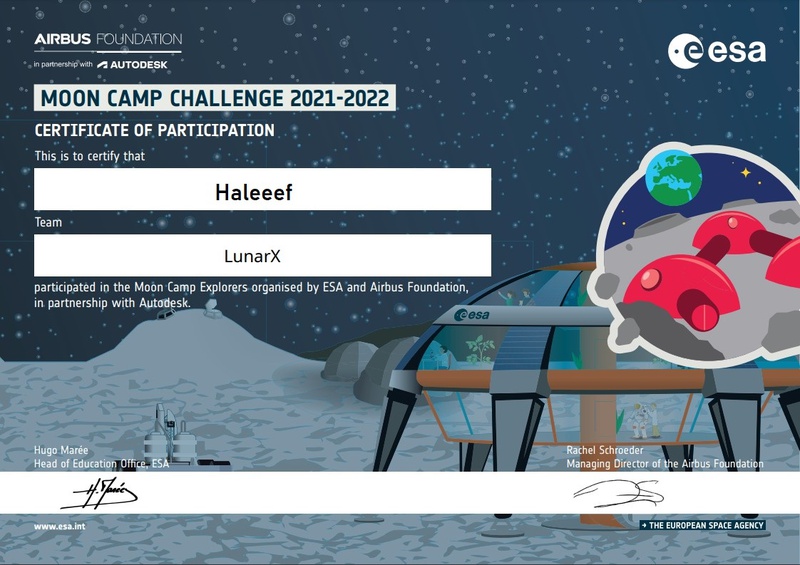 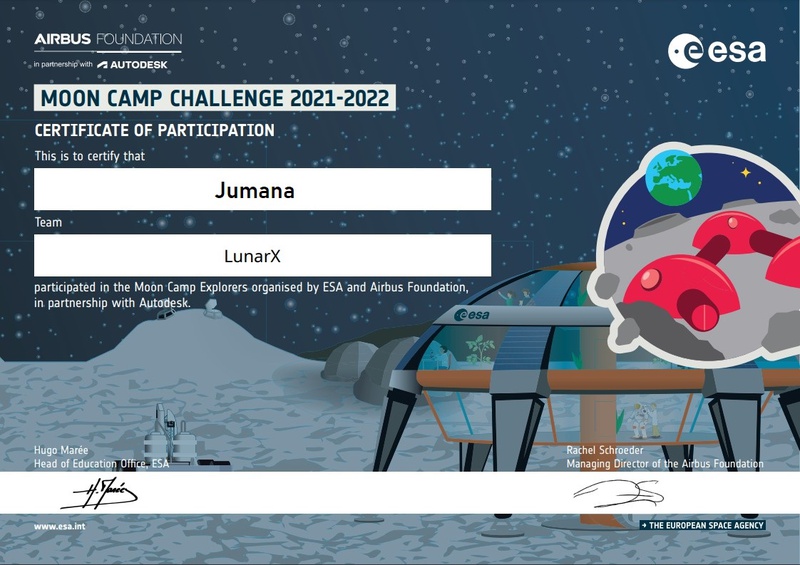 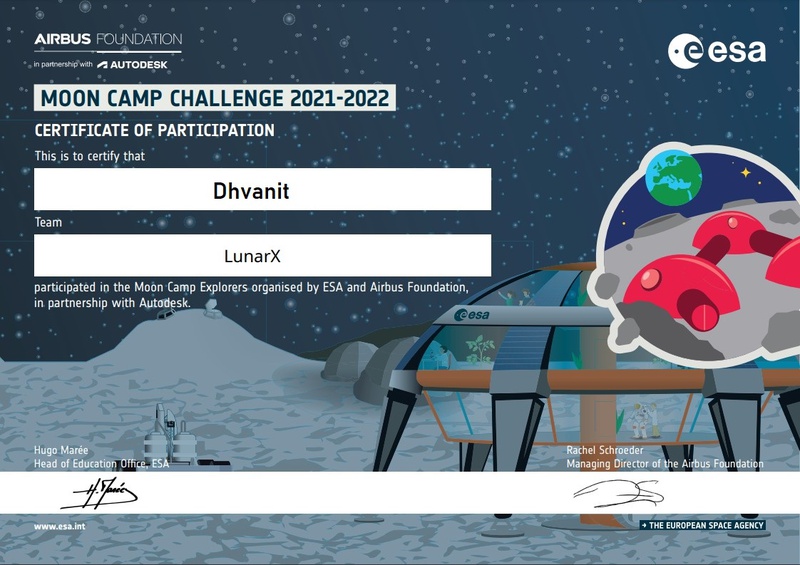 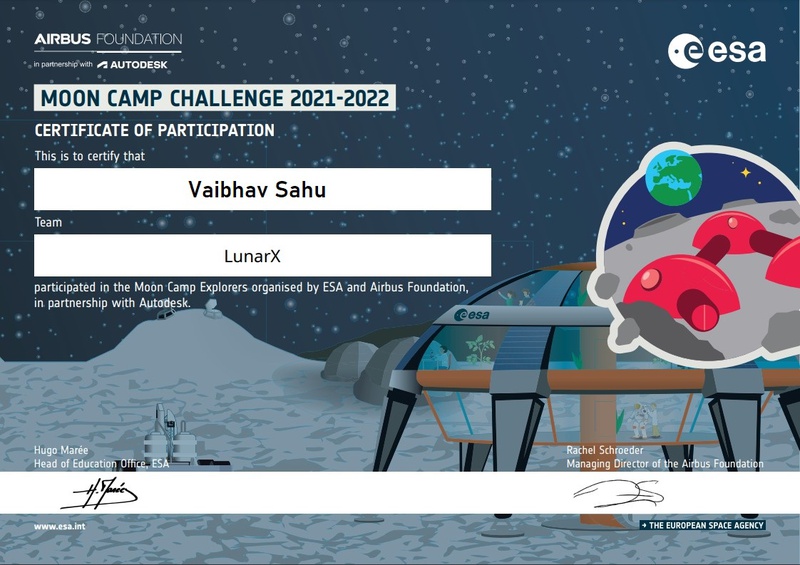