About Me: Hello, I am Ishita Leena Khapare studing in 9th grade.

The name of my 3D model is Lunar Colonization. This project aims towards producing or deriving oxygen from the regolith available on the lunar surface for sustainability of 3 astronauts for 6 months.

How much kg of oxygen is required by 3 astronauts for 6 months?

It is estimated that each astronaut needs 700kg of oxygen per year. When 3 astronauts are sent to the moon, they together need 2100 kg of oxygen for 1 year, but as the duration of stay for the astronauts is estimated to be only 6 months, they will require 1050 kg oxygen altogether.

What are the methods you have used to fulfill the O2 requirements?

The method I have used to fulfill the oxygen requirement for the astronauts for 6 months is molten salt electrolysis. The main component of this method will be regolith, which is abundant on the lunar surface.

Explain the working of each method used

The molten salt electrolysis is a method which uses two anodes, one cathode, the electrolyte (calcium chloride) and regolith. This method will help us to dissociate oxygen from its compounds in the regolith. First, the calcium chloride is mixed with the regolith and is heated up to 950 degree Celsius. After heating, the regolith will still remain solid but the calcium chloride is converted into its molten form, helping the process of electrolysis. After this, electric current is passed through the electrolyte. This will break the bond between the oxygen and the metals and thus the oxygen gas is separated from the metals. As oxygen is negatively charged it is carried towards the anode (positive electrode) and as metals are positively charged, it is carried towards cathode (negative electrode) and settles at the bottom. After this process, oxygen is in gaseous state and is then collected into a container, where it is filtered and is then sent transferred to the astronauts chamber in regulated quantity. Also this oxygen storage unit will help in filling up the oxygen cylinders to be used by astronauts when outside the chamber. The anodes are made of graphite and because of high heat the released oxygen sometimes reacts with carbon in the anodes and release carbon dioxide which depletes the graphite anode hence, anodes should be replaced periodically to continue smooth electrolysis process.

What are the parts of your design and explain their function?

In my 3D model, I have used graphite electrodes (anodes and cathodes), calcium chloride as an electrolyte, regolith as an main component of this process, containers to store, filter and regulate the oxygen produced and container to store the by product metals of the Electrolysis process to be used for making machines parts ,etc. I have also used solar panels and battery to support the electrolysis process.

Regolith:- This is the abundantly available layer of the moon which contains metal oxides, containing approximately 40% of oxygen.

The solar panels:-The solar panels will collect the sunlight and convert the solar energy into electricity which will afterwards be used in the electrolysis process.

Battery:- The electricity generated by the solar panels is stored in the battery. This battery converts the electric energy into heat energy which is used to melt the electrolyte which will help in conduction of electricity. Also, it is used to provide electric current to the anodes and the cathode to facilitate the electrolysis process.

Oxygen storage filter and regulator box:- The oxygen released from the electrolysis process is stored in this container and it will be sent to the astronaut chamber or will be used to fill the astronauts' oxygen cylinder after filtration in regulated amount.

Did you enjoy making it?

I had a lot of fun making this project and learning more about science. I learned about molten salt electrolysis process to generate oxygen and metal and had a great experience applying that knowledge into making this project. I was always fascinated by space, learning and making a model that can be useful for astronauts gave me a great sense of achievement. Though this is just the first step, but I am sure with this knowledge and further continuous learning, I can, in future help the world with interstellar colonization. 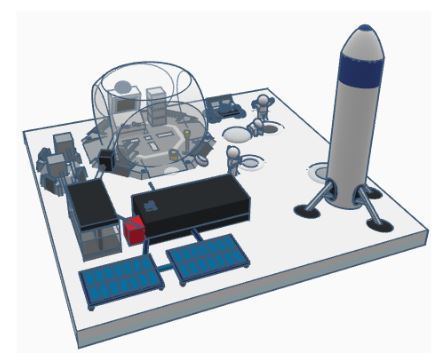