About Me: I am Deron (Grade-8) studying Martian Rocket Science course in Give-Me-Five. My interests are in playing cricket, swimming, playing piano, chess, coding, mathematics and solving puzzles. Here are few of the rocket designs I made. I took 30 minutes to make each rocket model. I made these in Tinkercad:

Rocket design: We used a 2-litre water bottle, a non-return cycle tube valve, and an air pump for this activity. In the bottle cap, we fixed the valve. Water and air are used as the propellant. In the bottle, we filled 30% of water.

Experiment: The bottle was filled with pressure using the air pump. While launching, we removed the cap of the bottle, and pressurized water & air came out from the nozzle of the bottle. The thrust due to released air & water pushed the bottle in the opposite direction according to Newton’s 3rd law.

Vega Rocket:
The rocket, named after Vega, the brightest star in the constellation Lyra, is a single-body launcher (no strap-on boosters) with three solid rocket stages.
It is designed to launch small payloads — 300 to 2500 kg satellites for scientific and Earth observation missions to polar and low Earth orbits.
I made this European rocket in Tinkercad. 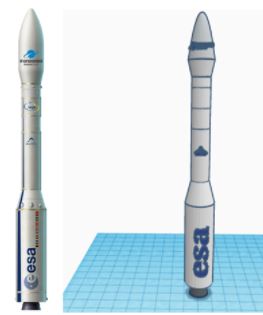 GSLV Mk III:
GSLV Mk III, chosen to launch Chandrayaan-2 spacecraft, is a three-stage heavy lift launch vehicle developed by ISRO. The vehicle has two solid strap-ons, a core liquid booster and a cryogenic upper stage.
GSLV Mk III is designed to carry 4-ton class of satellites into Geosynchronous Transfer Orbit (GTO) or about 10 tons to Low Earth Orbit (LEO), which is about twice the capability of the GSLV Mk II.
I made this Indian rocket in Tinkercad. 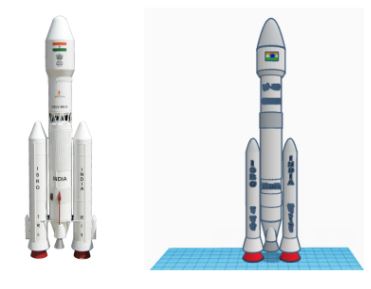 Falcon-9 rocket:
Falcon 9 is a reusable, two-stage rocket designed and manufactured by SpaceX for the reliable and safe transport of people and payloads into Earth orbit and beyond. Falcon 9 is the world’s first orbital class reusable rocket. Reusability allows SpaceX to refly the most expensive parts of the rocket, which in turn drives down the cost of space access.
I made this rocket in Tinkercad. 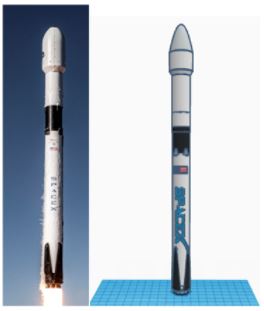 H-IIB ROCKET:
The H-IIB Launch Vehicle is Japan's large-scale rocket.
H-IIB was able to carry a payload of up to 8,000 kg (18,000 lb) to Geostationary transfer orbit (GTO), compared with the payload of 4000-6000 kg for the H-IIA, a predecessor design.
I made this Japanese rocket in Tinkercad. 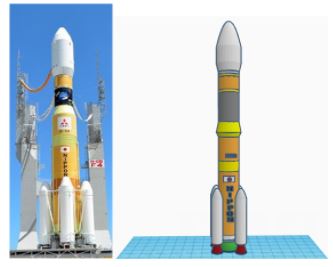 PSLV C48:
India’s PSLV-C48 launched RISAT-2BR1 along with nine commercial satellites of Israel, Italy, Japan and USA from Satish Dhawan Space Centre, Sriharikota.
RISAT-2BR1 is a radar imaging earth observation satellite weighing about 628 kg. The satellite will provide services in the field of Agriculture, Forestry and Disaster Management. The mission life of RISAT-2BR1 is 5 years.
I made this Indian rocket model in Tinkercad. 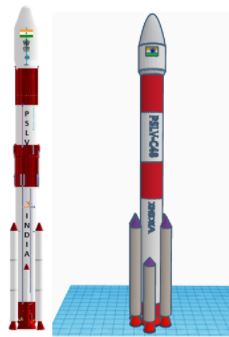