About Me: Hello everyone my name is Addon A. Mathew, I am 11 years old and I am in Grade 5. Today I am going to tell you about my rover called Adventurer.

It is designed to operate in the low-gravity vacuum of the Moon and to safetly move around in difficult terrain.

It can carry 4 Astronauts, scientific & experimental equipments safety around the terrain.

Structure
The vehicle is made to carry 4 astronauts with or without spacesuits.
There is a thin layer of water covering for radiation protection and beneath that there is a layer of titanium and a layer of aluminum which hold up the whole rover and gives meteorite protection.

Air supply
The air tanks will supply sufficient oxygen for the Astronauts on the rover.
The rover is fitted with 4 cylinders & additional 5 cylinders as backup for providing enough oxygen for the team.

Parts inside the Cubicle Seats: The seats allow full comfortability and have a strap to hold the astronauts down.

LED Screen: The screen helps in observing what the cameras see and also monitors the pressure in the cubicle.

Arm Control: Arm controls will be controlled by the 2 back astronauts which helps in moving the drill, the spectrometer, the 2 small cameras and the arm which grabs the rock to analyse it further.

The cooling system includes the fans that are on the top of the rover. The fans cools down the rover so that the rover doesn’t overheat.

There are 3 fans that’s wind is sent through pipes to the inside of the cubicle which cools it down. The thin layer of water cools the walls as well.

The arm holds the drill, the spectrometer, the 2 small cameras and the claw.

The drill has 2 small tubes that help hot gases exit the drill and into the rock and if the rock is still cannot be drilled then a powerful laser beam can be shot out of the machine and into the rock which vaporizes the rock.

The spectrometer can then study the rock’s composition through the gases.

The cameras observe the rock to take pictures and the claw grabs the rock for further analyzing.

There is 2 large parabolic antenna connected to the telemetry device which sends messages back to earth. 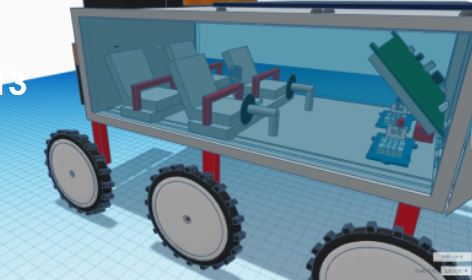