About Team: I am Sidharth peringavil
I am Sukruti Krishnamurthy Gowda
I am Tharunram Sathurappan Deepak
I am Ayesha Zareen
I am Neha V


About project:
Our group name is Accio Luna. The team's name is derived from the Latin word "Luna" meaning moon. Accio is a spell which is used for summoning objects. Together, "Accio Luna" means Summon the Moon. We plan on accommodating 6 astronauts at a time. They will stay there for 5 to 6 months. And other crew members could join once the previous one goes on rest.
Astronauts will conduct following experiments:
Growing plants
Water detection and extraction
Research on bacteria such as rhizobacteria
Our camp consists of three living spaces for the astronauts. Two astronauts will occupy each living space. The camp consists of a greenhouse, a battery storage place, a fusion reactor, a hydrogen and oxygen obtainment station, a water purification station, a medical bay, a 3-D printing room, an exercise room, an experiments lab, a control room, a communication room, rovers and parking spaces for them, a room for robots, missiles to hit incoming meteorites and a rocket to transport cargo between moon and earth.
We are using lithium hydroxide to suck carbon dioxide exhaled by the astronauts. We are using calcium carbonate to produce carbon dioxide for the plants. We have nickel cadmium batteries for storing energy; these batteries produce oxygen and hydrogen as by product. We are using lunar bikes to help astronauts move around; these are a fraction of the cost of rovers. We are still going to use a rover though for bigger operations like drilling and collecting samples of the lunar surface, etc.

We chose the Shackleton crater because its rim receives continuous sunlight except during eclipses. We will have a good energy source. Since it is located on the South pole of the moon, it will have water ice which we can use for drinking, bathing, electrolysis for obtaining hydrogen and oxygen, cleaning, growing plants and other uses. It will be very helpful for us. We can also put antennas along the peaks of the rim of the crater which will help in communication with Earth with no disturbances. Also, the South Pole is the most investigated part of the moon.
How do you plan to build your Mooncamp? Which materials will you use?


The astronauts will construct the moon base with the help of robots. We are going to decompose calcium carbonate by heating to obtain carbon dioxide, for the plants, and calcium oxide. Calcium oxide can be used to make porcelain, glass, in water softeners, and cements. Also, slag silicate from water ice can be used to make cement and build structures. We will have a 3D printer in the base to use waste materials which can be recycled. Solar panels, antennas, walls, computers, seeds for plants for the first month, robots, rovers, batteries, etc. will be provided from earth.

For the initial stage, water is sent from earth. We also mine ice from the lunar South Pole and purify it to make it usable water. First, we will scoop up the water ice, and the heavy metals, dirt and ice are separated by sieving it in the aqua factorem process. Then it will be mixed with urine from the astronauts. It will be boiled, centrifuged and then mixed with the sweat from the astronauts and humidity in the air. It is then filtered and checked for any contaminants. If there are no contaminants, the water is stored for use.

For the first three months, during the plant growing stage, food will be sent to the astronauts through rockets from earth. We will send rehydratable, frozen foods, foods with intermediate moisture, and some in their natural form. We are using aeroponics and hydroponics to grow our plants because it is soilless farming with faster yield. We are growing plants like lettuce, micro-greens, tomatoes, cucumbers, broccoli, cabbage, etc. We also use tissue culture to provide the astronauts with meat, as meat is a good source of protein. The plants are checked by the astronauts with the help of a few robots.

We are using solar energy and fusion energy. Since we have our camp at the Shackleton crater, we will receive continuous sunlight at its rim where our solar panels are placed. We are using photovoltaic cells for the solar panels. We have nickel-cadmium batteries to store energy as these are resistant to mishandlings. They recharge very quickly. The fusion reactor produces the needed temperature for fusion of atoms using magnets. This is safer than nuclear fission because if something goes wrong, the plasma does not explode, it just cools down. Helium-3 on the moon is used for fusion reactor.

CO2 breathed out by the astronauts is absorbed by Lithium hydroxide and is then released in the greenhouse. Also, CO2 can be produced by decomposing calcium carbonate by heating. The plants release oxygen which the astronauts can breathe in. Oxygen can be obtained through electrolysis where water is split into hydrogen and oxygen. The nickel cadmium batteries also produce oxygen and hydrogen. We can also obtain oxygen from lunar regolith which contains 40% of oxygen. We heat the regolith and pass electric current through it, thus will obtain the oxygen. Nitrogen will be provided from earth and by dying plants.

To protect astronauts from meteorites, we will use missiles which will target the meteorites and break them apart so that they don’t hit the base and destroy it. We will have a layer of water and cement on the rooms. Water and cement shield us from solar radiation. We can get water from the water ice on the moon, and we can make cement using slag silicate found in the water ice of the moon and calcium oxide.

Universal Time (UT) will be followed on the moon. It is a modern form of Greenwich Mean Time. It is same everywhere in the Universe. So, the UT time on the Moon is the same as the UT time on Earth. The astronauts will wake up at 7:30am and they will go to a small bathroom in the side of the dome shaped base to finish their morning routine. Then they go to the greenhouse and collect some fresh vegetables for a day. There is a small kitchen in the base where they will cook the food and eat it. After eating the food they will head to the lab to conduct experiments and analyse the results. After lunch they will have some free time to either sleep or talk with their family members on earth. Then they will exercise to be fit for 2 hours. Exercising is a must to keep them healthy since the moon’s gravity is only 1/6th of earth which will lead to loss of muscle and bone density. By the end of the day, they will cook the dinner and eat together. Finally, go to sleep. During an emergency, astronauts will gather at a meeting spot near the rocket launch site, leave the moon camp in the rocket and return to earth. 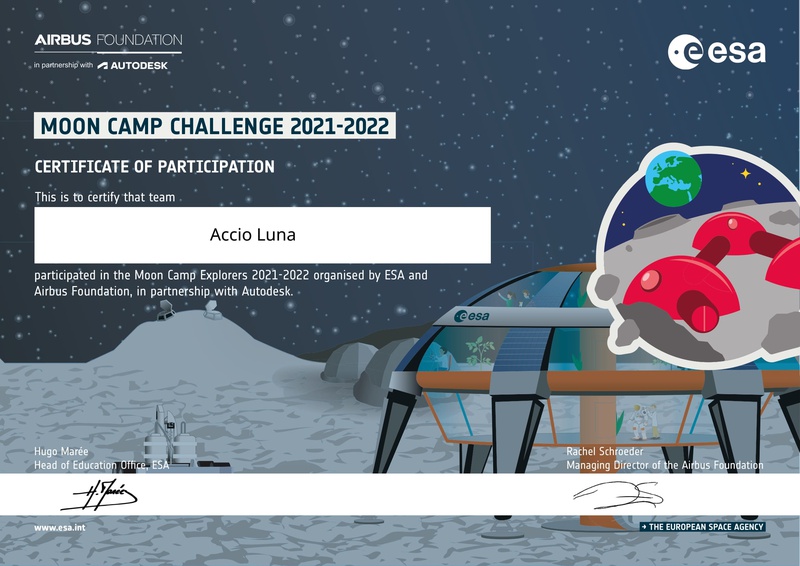 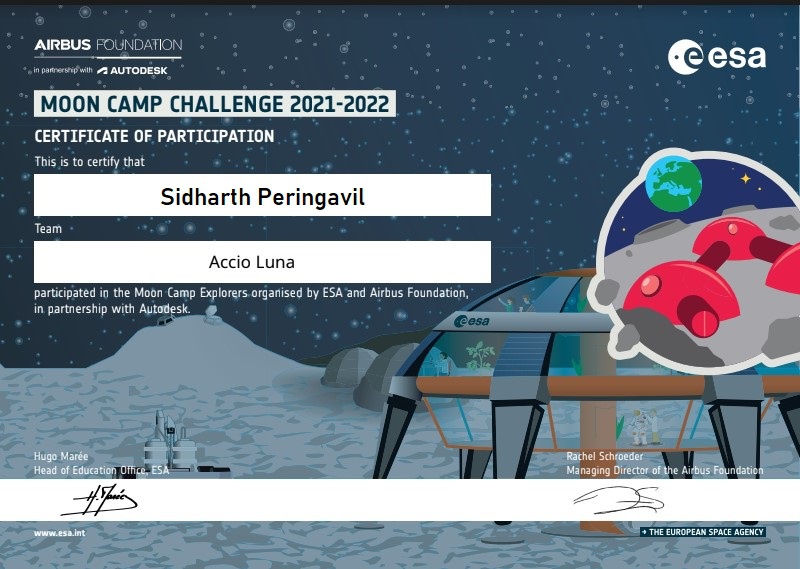 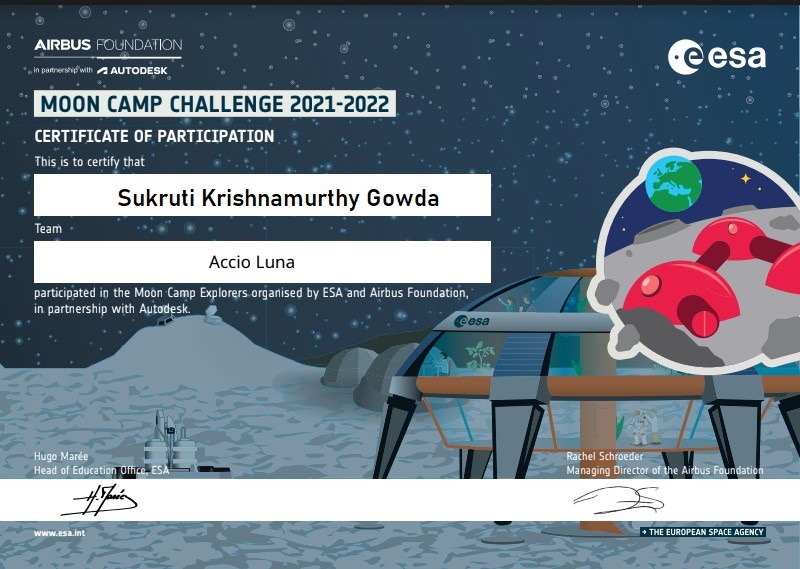 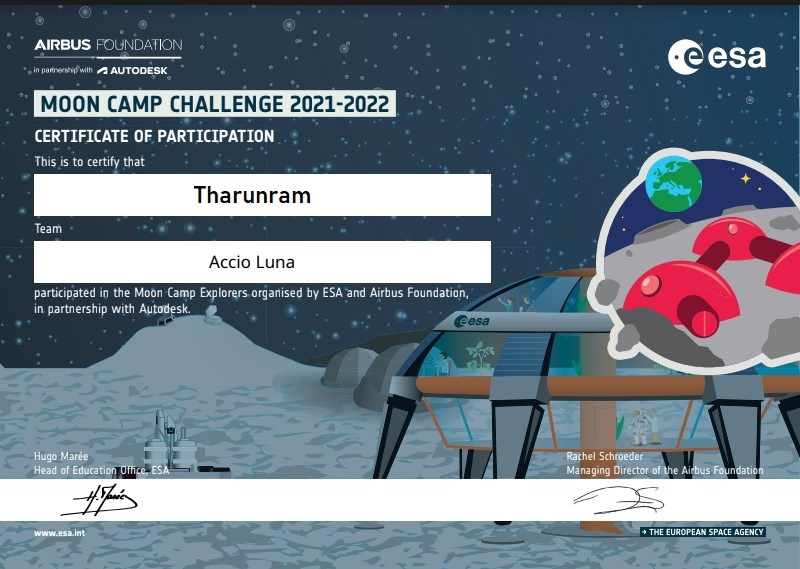 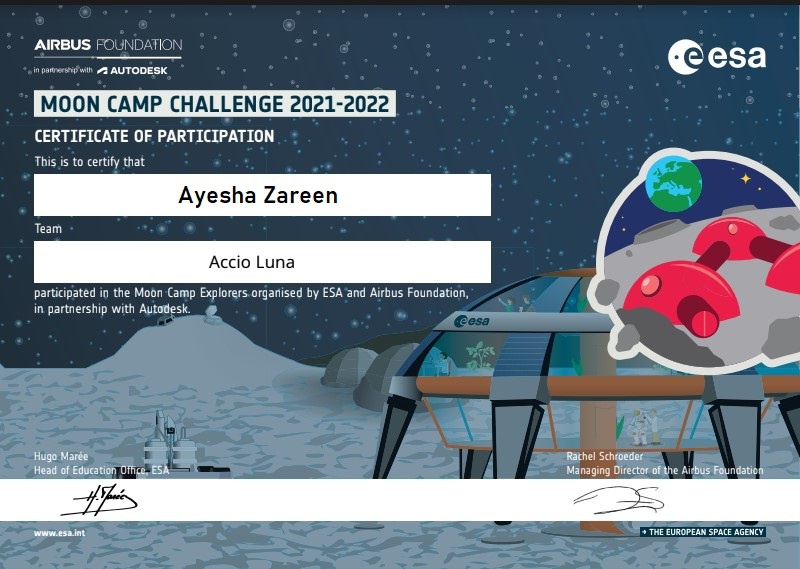 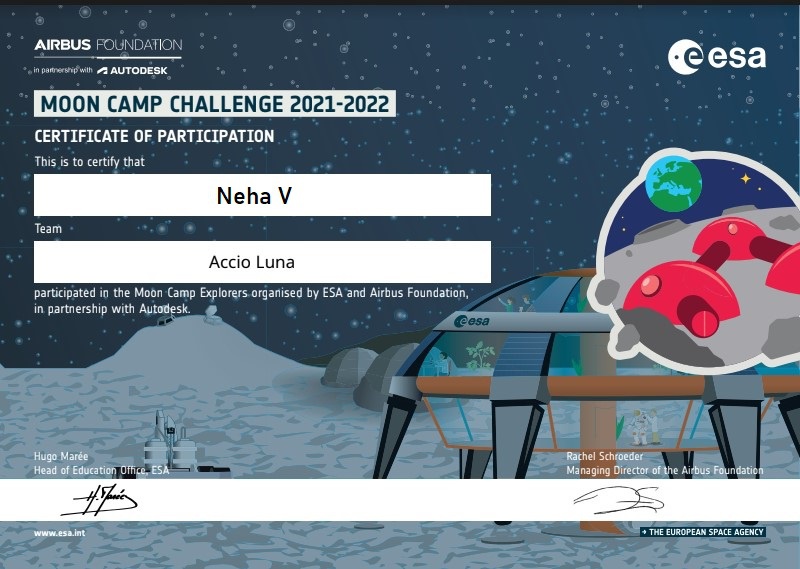